Something's been puzzling me for the past few weeks. At the end of each day I hibernate my laptop, stick it in my bag, and take it home. When I turn it on the next day, it tells me it powered off because the battery reached a critical level, and the battery has dropped to 3% (the shutdown threshold) from its original 100%. What gives?

I couldn't figure out whether the battery was draining itself overnight, or whether the computer was turning itself back on somehow. Luckily I have the terrible habit of falling asleep on the sofa (well, piece-of-sponge-with-some-slats) so at 3 o'clock one morning I caught it turning itself on.

Auto power-on wasn't configured in the BIOS and there was nothing plugged into the LAN port to wake it up. What had changed in the past few weeks? 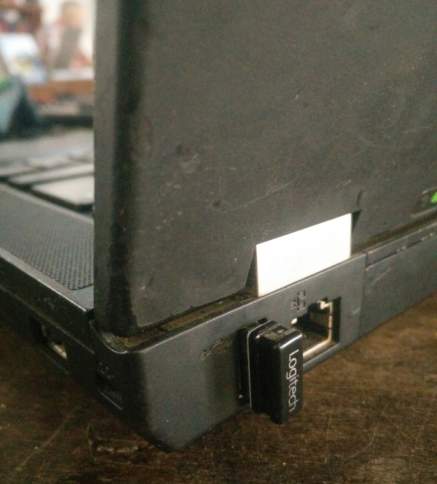 I should really clean that screen hinge.

I have a Logitech Unifying Receiver for my wireless mouse, and I had recently made the apparently highly important decision that it was probably safer to leave it plugged in all the time rather than pull it out every day so it didn't get bashed up in my bag (turns out they pull apart quite easily, and I'm 6,000 miles from a replacement). Was this the culprit?

Windows includes a handy utility to find out what devices are configured to wake a computer, powercfg. You can run powercfg /devicequery wake_armed in a command prompt:

You can also run powercfg /lastwake to find out what device last woke the computer, but since I didn't run it until the subsequent startup, this wasn't very useful. So, keyboard, mouse and the ethernet connection. The ethernet connection is out, since there's nothing plugged into it. If we go to Device Manager, the HID devices are listed under Keyboards and Mice:

Double-clicking on each one of them in turn (apart from the built-in keyboard, listed as Standard PS/2 Keyboard; and trackpad, listed as ThinkPad UltraNav Pointing Device (what a name!)) and going to the Power Management tab showed that each of them were configured to wake the computer. I don't have a keyboard connected to the receiver, but I unchecked them all just to be sure. If you're not sure which devices correspond to the Logitech receiver, go to Details and select the Hardware Ids property. My receiver shows a VID of 046D and a PID of C52B, but if yours are different you can google them to find out what manufacturer and model they correspond to.

Rerunning the powercfg command above now shows that only the ethernet adapter can wake up the computer: